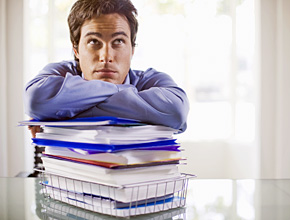 Stress is a normal physical response to events that make you feel threatened, or upset your balance in some way. When you sense danger – whether it’s a real or an imagined one – the body's defenses kick into high gear in a rapid, automatic process known as the “fight-or-flight” reaction, or a stress response. The stress response is your... >Full Story

Enduring Torture in a POW Camp

Profile on:  Brigadier General (ret.) Robinson Risner, veteran pilot If you fall off a horse, as the old saying goes, the best thing you can do is dust yourself off and get back on before you lose your nerve. Few people realize the truth of this adage better than Brigadier General (ret.) Robinson Risner of Austin, Texas. As a veteran pilot... >Read More

All my life, I wanted to be a head football coach of an NFL team more than anything else. At times, I even wanted it more than God or my family. I bought right into the world's game plan. In my eyes, being a head coach would give me all the things I wanted, things like money and prestige.... >Read More

I based my whole life on a t-shirt which read: "Basketball is life and the rest is details." I had finally reached the pinnacle of my basketball career. All the sacrifices, hard work, and persistence had finally paid off. I was going to the 1996 Olympic Games. We were representing Canada, competing against the world's best, chasing after a gold...... >Read More

The Man Behind the Weapon

A giant of a man weighing over 300 pounds, Carl Swaboda of Vienna is reputed to be the only man in athletic history that has raised aloft more than 400 pounds. But you might wonder if other less publicly known men somewhere else in the world could actually lift more. Throughout history the strongest men of the land were often... >Read More